Our family was forever changed on April 12, 2005.  My sister, Sherri, worked at a local hospital as a computer tech person.  She was always crawling around in the most unlikely spaces.  This is where they think she contracted Encephalitis.  For those of you who are not familiar with this it is an infection in the brain, usually caused from a virus.  In this case it was from the herpes virus...the same that causes cold sores.  She was also pregnant at the time.  Weeks went by with no word on what was causing her strange symptoms.  The doctors kept saying it was just a bad case of the flu.  6 years ago today her brain started swelling so fast they had to rush her into surgery.  I remember getting that dreaded call from my Mom.  I was not far from the hospital when she called, but what was only minutes seemed like hours until I reached the hospital.  I reached the hospital and found my Dad sitting on the floor sobbing.  This is the only time I have ever seen my father like this.  I didn't know what to do.   People started arriving in groups showing their support for our family.  My aunts and uncles all drove many many miles to be there with us.  The surgery was about 7 or 8 hours at least.  What we found out later was that when they opened her head up she was brain dead.  They removed the right frontal lobe of her brain and her brain began working again.  Only God could do something like that!!  But at that time I did not have that relationship with God.  I remember being SO angry with God for "doing this to my family!!"  My parents are very strong Christians, they called their Pastor to come up to the hospital.  I was mad that he was there.  I didn't understand God and His ways at time. 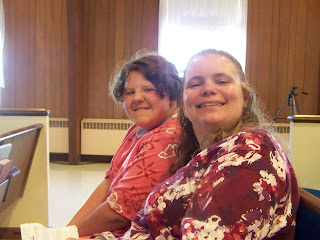 This is Sherri in the forefront of the picture with our daughter Hannah.  So you can see she is looking great!  She is living in her own apartment with 24 hour care.  She still struggles with memory issues.  But I am VERY thankful for her still being with us!  Also, she delivered a very healthy baby boy during all of this.  He will be 6 years old in July!

It was through all of this that my husband and I came to know Christ.  We both saw the grace that God had given my parents to endure this tragic event.  We wondered how could 2 people praise God for what had happened.  We wanted that!!  Now I can say that I'm very thankful for having that.  Although it took me over 30 years to see my need for a personal relationship with Christ, I am SO very thankful for the parents God gave me.  Without their walk with Christ I would not be the person I am today.

Wow! I stopped over because you left a comment on my blog "Freak of Gastric Bypass" I'm so glad I did. What an amazing road to Christ you have traveled. Thank you for sharing what was obviously a very emotional experience.

I am thankful for the storms in life, because He uses them to draw us to Him. What a testimony of God's grace and healing in your sister's life. So glad you and your husband came to the Lord. 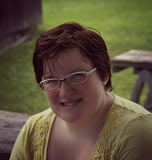 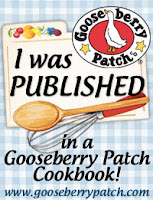